We woke up this morning in Kalaikhum, having slept reasonably well. However, we both struggled with stomach issues. Perhaps it was the water the salad from last night was washed in.

After a simple breakfast of eggs, bread and coffee on the terrace right above a mountain stream, we packed up and headed out. The plan was to get to Khorog and then decide on our next course of action. We were hearing stories that the main M41 road between Khorog and Murghab had been washed away due to warm temperatures that triggered melting glaciers and consequently, heavy floods. 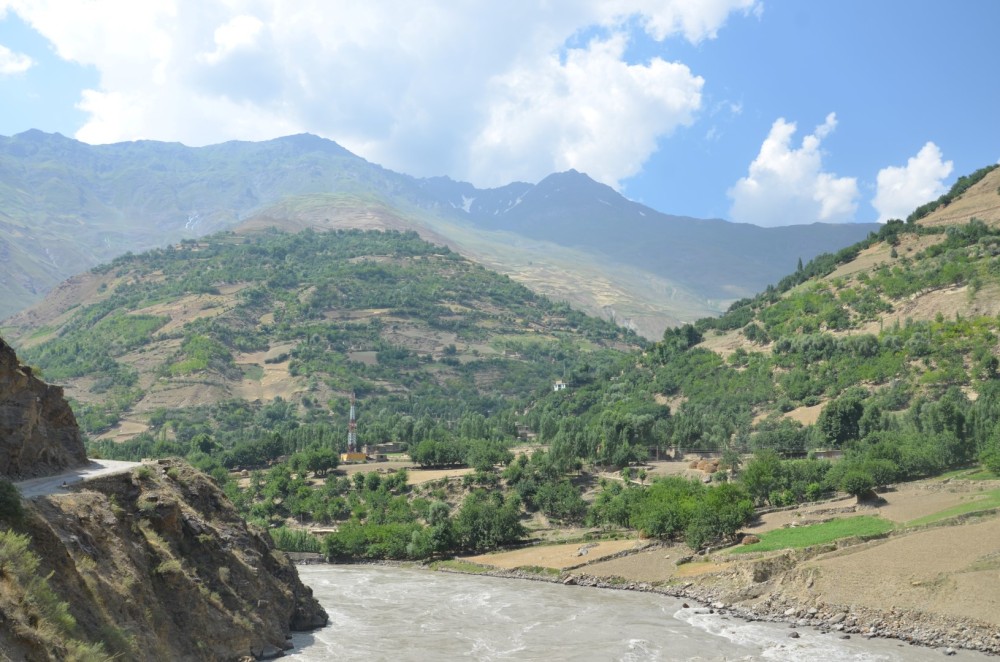 We weren’t sure if this meant that the roads were completely impassable. Moreover, our little Kangoo was already very low. It would not survive flooded roads. We decided to get to Khorog first, ask around and then make our decision.

The road, if we thought was bad yesterday, was worse. It was all gravel now. Everything in the car, including our bones, rattled along merrily. Despite this, the area had a wondrous beauty. There were few cars, but the rocky landscape, dotted by small, leafy villages on the Afghan side was breathtaking.

We were separated by the Panj river, a mean, ferocious body of water that looked ready to swallow us up if we made one wrong move. The stark contrast between the two sides was mellowed out by friendly Tajik people who would always wave with enthusiasm when they saw us. Most would look on in amazement to see a woman driving. 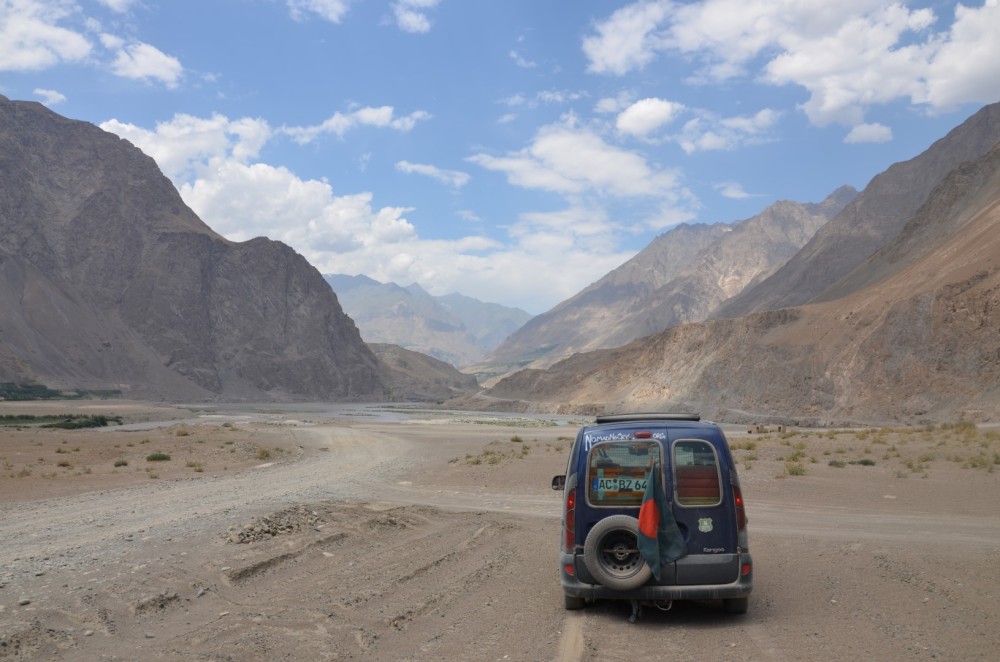 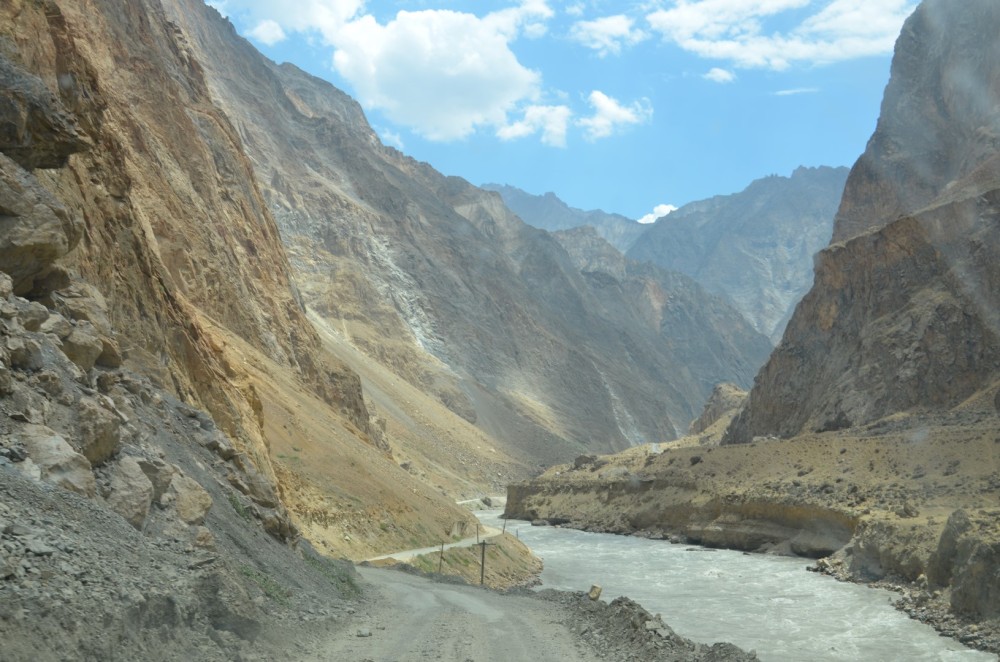 Once again, there were numerous checkpoints dotted along the M41. The officials at every check point copied down our passport number and GBAO permit details painstakingly by hand. At one point, we stopped for lunch, which consisted of tinned green beans, corn and mandarins.

We eventually arrived in Khorog, the capital of the Gorno-Badakhshan Autonomous Region in Tajikistan. It was a much bigger town compared to all the villages we passed through since leaving Dushanbe. We found a World Food Programme office, and decided that they’d probably have a good idea of the road conditions and also be able to communicate with us.

We found the chauffeur of an official WFP Land Cruiser – who’s job probably is to traverse these tricky roads – and asked for advice. He took a look at our sad, dusty Kangoo, and said, “One could potentially drive between Khorog and Murghab with a 4-wheel drive, but not with your car. You’ll get stuck.” We valued his wisdom and decided to reconsider our route. We chose an Indian Restaurant (just…because) for dinner. I needed some spicy, comfort food to get my heading working again after such a long drive.

We looked at all the options. Unless we wanted to turn back and return to Dushanbe, the only way forward was by detouring through the Wakhan Valley, a mountainous, rugged area part of the Pamir, Hindu Kush and Karakoram region of Afghanistan and Tajikistan. It would extend our trip by another day, no doubt. But the Wakhan Valley has a reputation of having endless stretches of scenic routes, with views of the Hindu Kush range, castle ruins and pretty villages. Why wouldn’t we go? 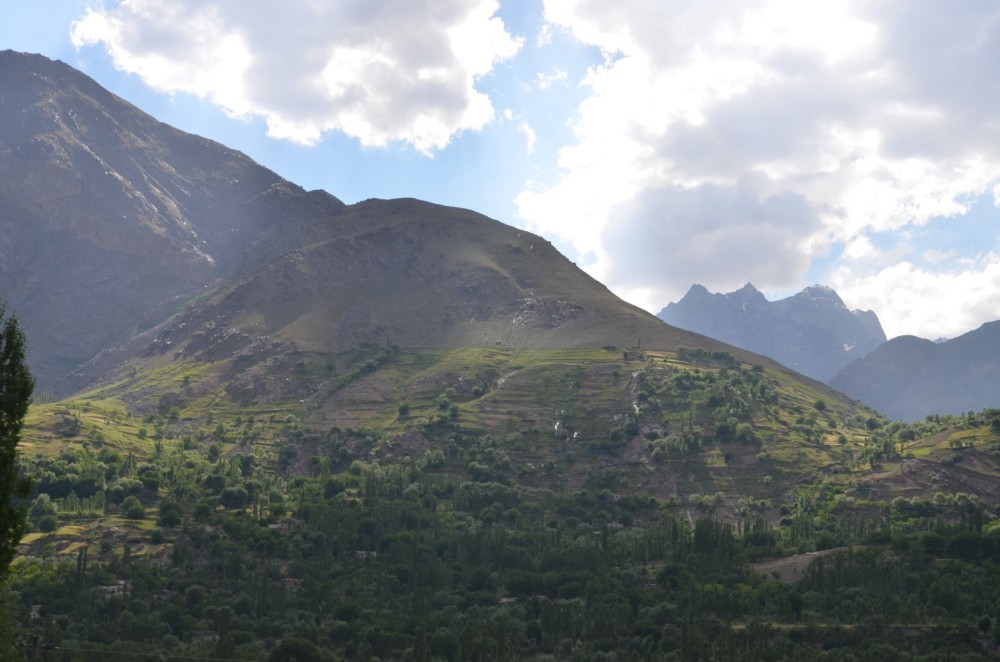 After being served a curry without rice (which had to be ordered separately!), we decided to continue driving since there was still light out. We picked up some cash at an ATM, surprised that my debit card even worked there, and was back on the road again.

We arrived in Ishakashim at 9pm at headed straight to the Hanis Guesthouse, where we discovered a large group of German tourists being entertained inside with local music and dancing. The host, Wali, spoke English well and offered us the last two beds he had available. He also invited us to join the festivities and the bonfire outside.

Ishkashim is on the very edge of Tajikistan’s most southern border. It is also a place where on Saturdays you can cross into Afghanistan to visit the weekly border market without a visa. But alas! We were there on the wrong day.

The day had been long. But here we were: in the middle of nowhere, on the edge of Afghanistan, listening to local music and dancing under a clear, starry night.