I woke up in our campsite by the side of the road, feeling tired and restless. I had not slept a wink. Because we sleep in the car which serves as a makeshift camper van, we had left the sunroof open for some air. As a result, I was covered in several layers of sand and dust by the next morning. That’s what you get for camping out in the desert!

We had a slow start to the morning. After a small breakfast of black tea and granola bars, all 5 teams packed up and started driving together by 9:15am. While getting gas, we realized that they wouldn’t accept US dollars, so we had to find a way to change our US dollars into Turkmen Manats. 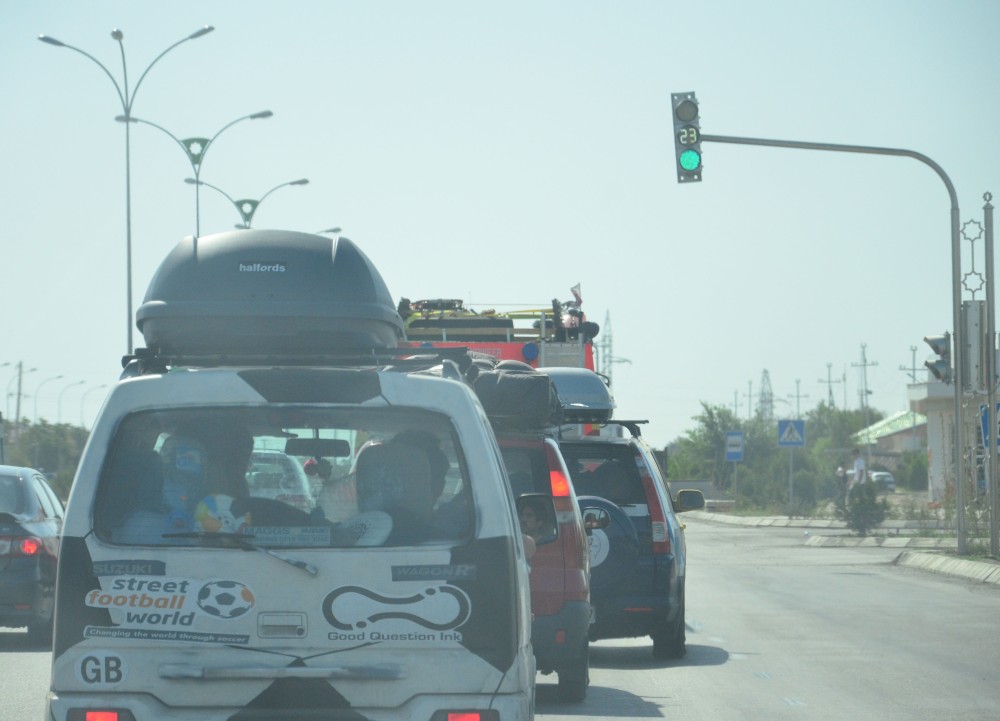 That led us on a hunt for a bank that either had an ATM or a teller that would change our money. We got shooed away from the first bank because all the boys were dressed in shorts – apparently an absolute no-go in a conservative country like Turkmenistan. No concessions were made even if you were a Westerner!

As a woman, I had dressed modestly in long pants with a shawl draped over my tank top, despite the stifling heat. I was rather pleased that modesty was demanded of the men too. The boys were taken aback by this seemingly unreasonable request to dress in long pants. Given that there were only two women, including myself, in our group of five teams, most people in our convoy grumbled and went back to the cars to change into something more decent!

We eventually got some money changed and set off for Ashgabat, a mere 7-hour drive away. However, we only reached the capital at 6pm that evening. Since everyone was used to driving at different speeds, we agreed to split up and meet at the Sofitel Hotel in Ashgabat. It was the only place in town with free internet, according to the Lonely Planet.

The long drive to Ashgabat was mostly uneventful. We met a lot of camels along the way, and most people driving alongside would do a double-take when they saw our bizarre and unfamiliar looking Renault Kangoo on the Turkmen highways. This would normally be followed by a smile and a friendly wave. 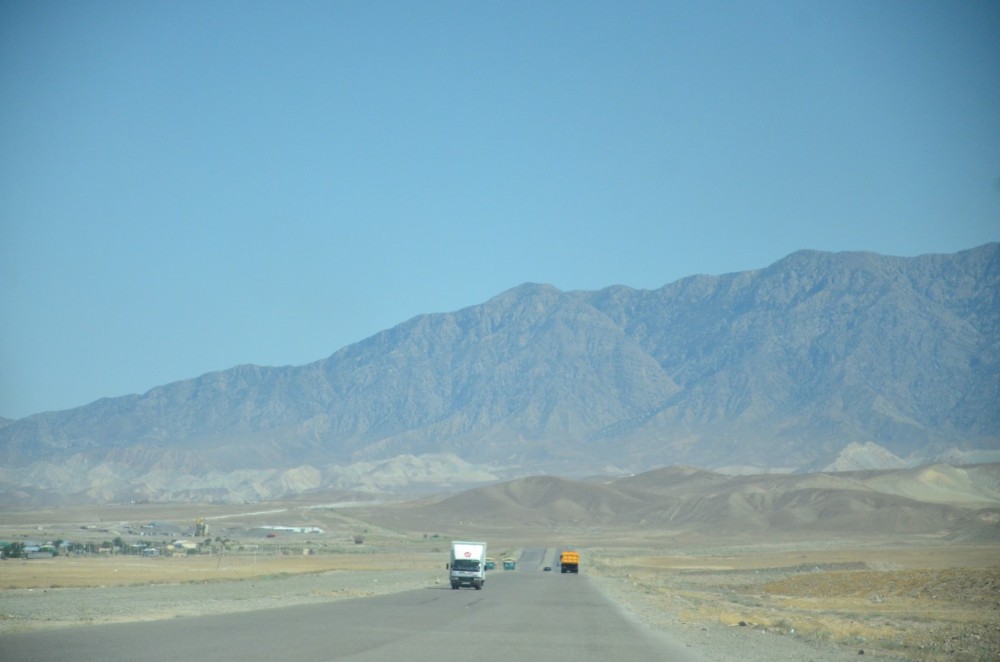 Despite the border officials’ lack of enthusiasm about letting us into the country, Turkmen people proved to be incredibly warm and friendly. As we were driving into Ashgabat, these two little grandmas sitting on the back seat of a car caught sight of us. They did a double-take and when they saw us wave, they waved back enthusiastically. Before we knew it, the car had pulled up next to us as we were driving at 80km/h. At this point, I was thoroughly confused. What did they want? Without a word, the driver steadied his car alongside ours and one of the old ladies extended her hand. In it was two large pieces of bread! Moritz happily took delivery through the moving vehicle. The other car sped off with a parting wave and we were left with these giant pieces of homemade bread with a spinach filling! We hadn’t eaten all day and just to be offered food through a moving car felt incredible. This was certainly the most memorable moments from our entire trip. We were blown away by the generosity of these two old women. 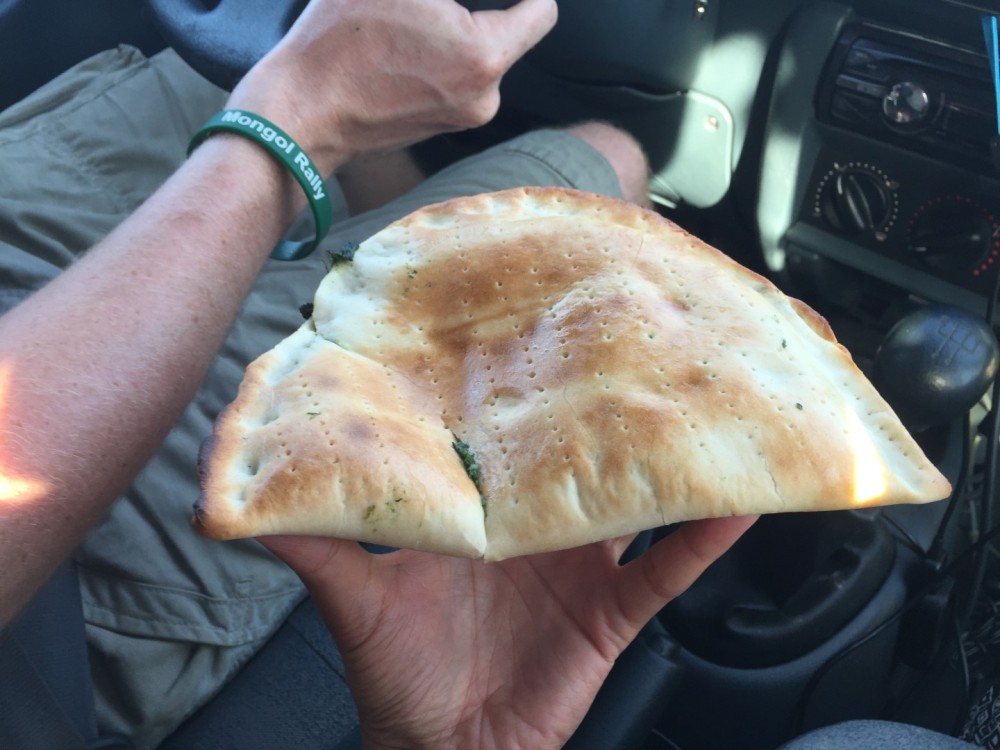 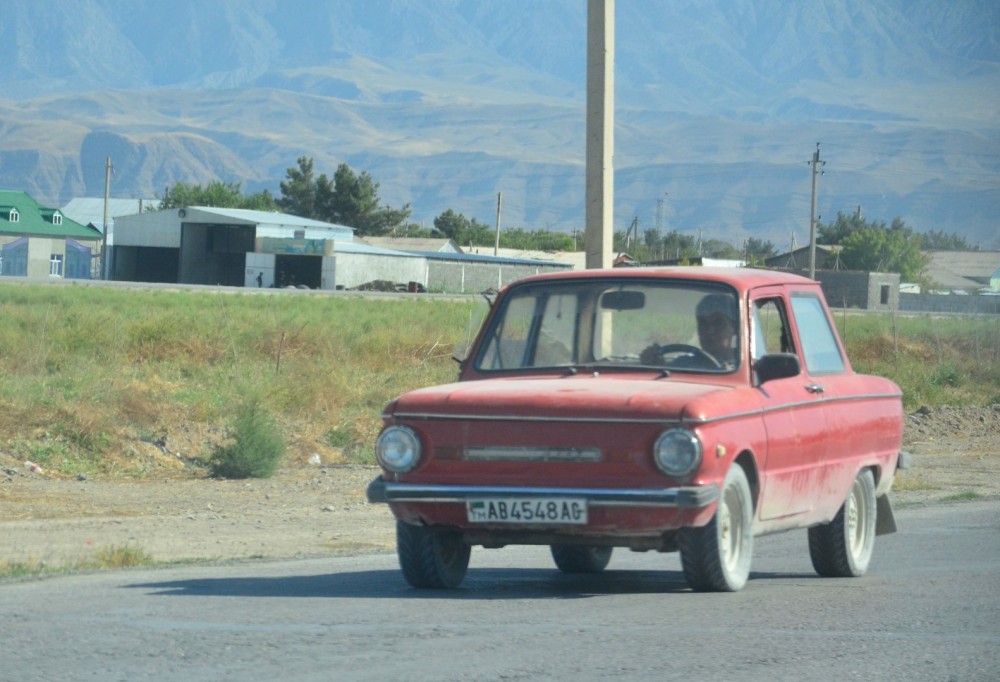 We all arrived around the same time at the Sofitel. It was quite amusing to walk in to this 5-star hotel chain, all dusty and disheveled. I questioned whether they’d even let us in! But the hotel was deserted and they did not seem to mind us gaping at their fancy decorations.

I found a good vantage point and took a couple of discreet shots of the city, including a large gold statue of Saparmurat Niyazov, the former President for Life of Turkmenistan. Having established a cult around himself, there are multiple gold statues of him scattered around town. 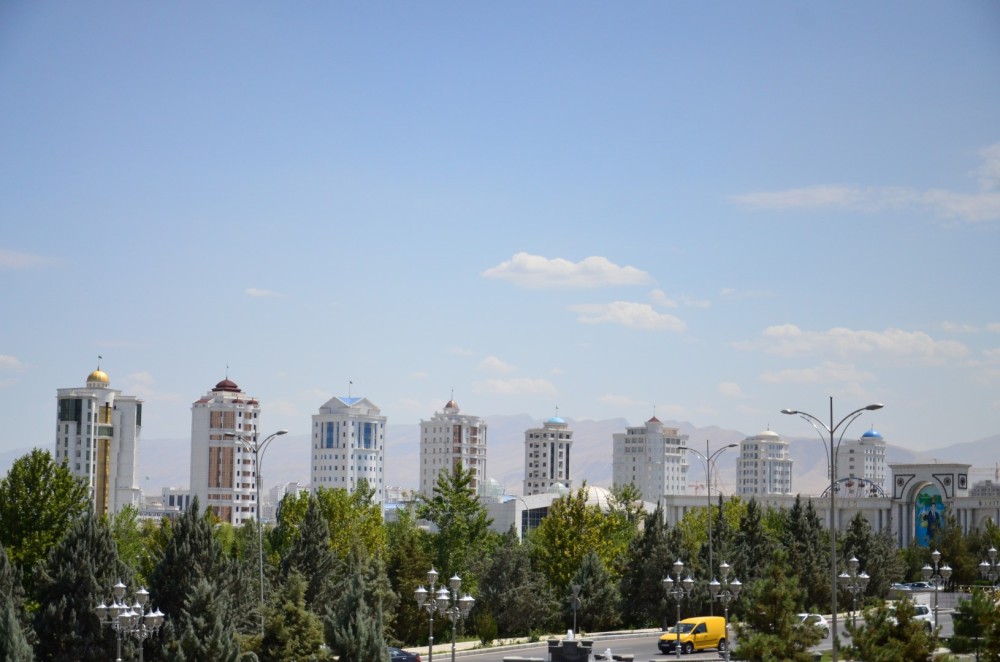 We got ourselves a drink at the hotel café, and tried to make full use of the free wi-fi. We still needed to find accommodation for the night. Facebook and Twitter, seemingly, are completely blocked. Accessing Gmail proved to be quite the challenge. I called my mother over Skype just to let her know we were doing ok. We had spoken for barely 2 mins, when I joked, in Bengali, that it felt like being in North Korea. The line was immediately disconnected. I wasn’t able to call her back throughout the duration of our stay in Turkmenistan. You take certain things for granted living in the West. Talking on the phone without being listened in on is one of them!

We decided to check out a few hotels that we had found on Tripadvisor. The guys from the Oasis Tour were staying at Hotel Ak Altyn. It charged a hefty 110 USD per night. We were keen to find something cheaper. Ashgabat has very few budget options but we were willing to cough up to 70 USD. We visited a few hotels that we could find online, but every time we approached the hotel’s receptionists, they would vehemently shake their head and indicate they had no rooms for us. It was rather rude and surprising. The hotels were massive, Soviet-style buildings and we just couldn’t believe there were no free rooms. We eventually deduced that the hotels probably needed extra registration procedures to accommodate foreigners. It was probably not worth the effort and therefore it was easier to refuse us a room. 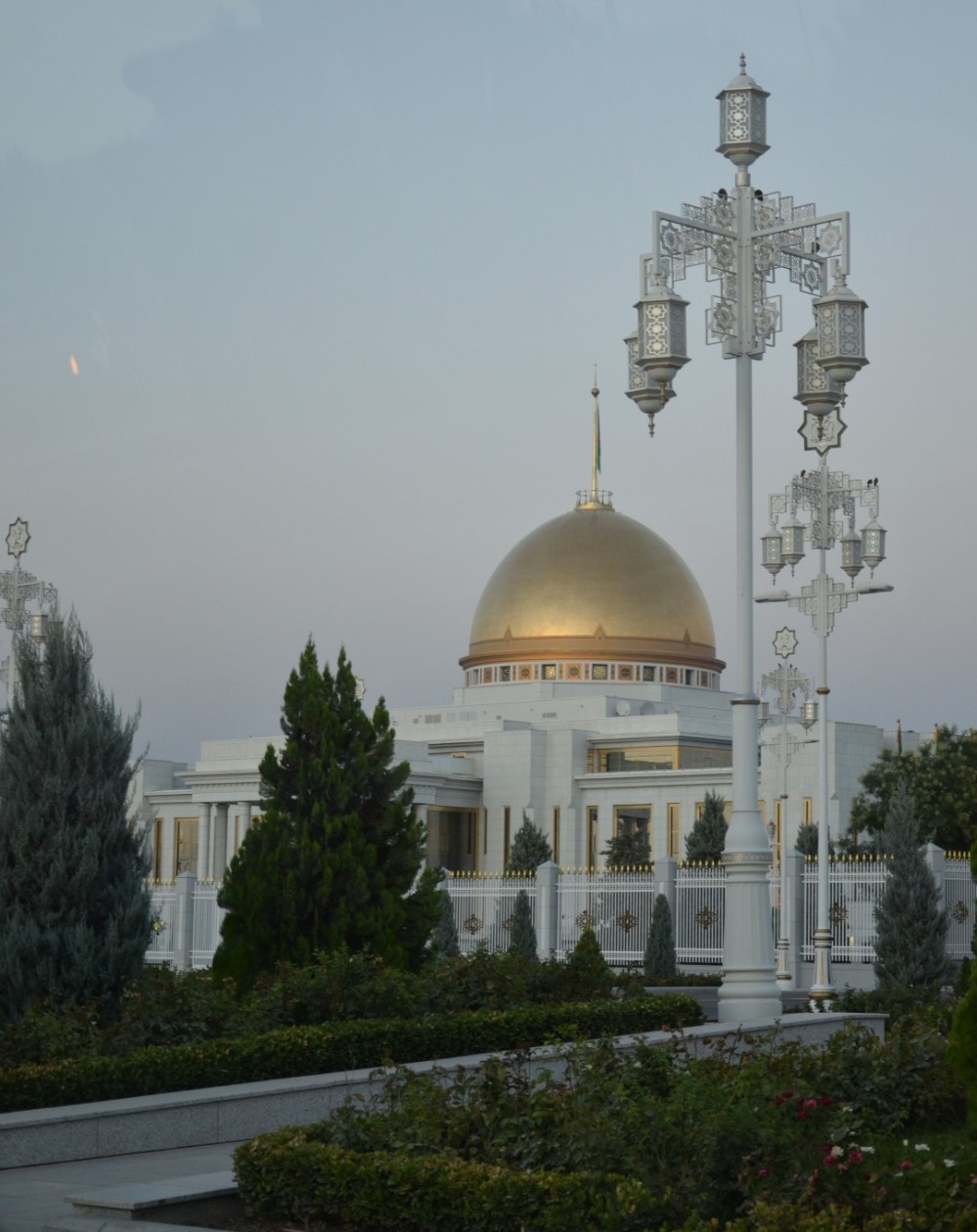 Despite our struggles to find accommodation, people were keen to help everywhere we went, especially if they spoke a little English. If they couldn’t speak English, they would promptly flag down someone walking by who could potentially help. We met an electrical engineer who escorted us to a hotel by car when he found out that we were looking for a place to spend the night. Alas, that hotel rejected us too and we eventually ended up at Hotel Ak Altyn, yet another massive Soviet-style hotel with very basic amenities. 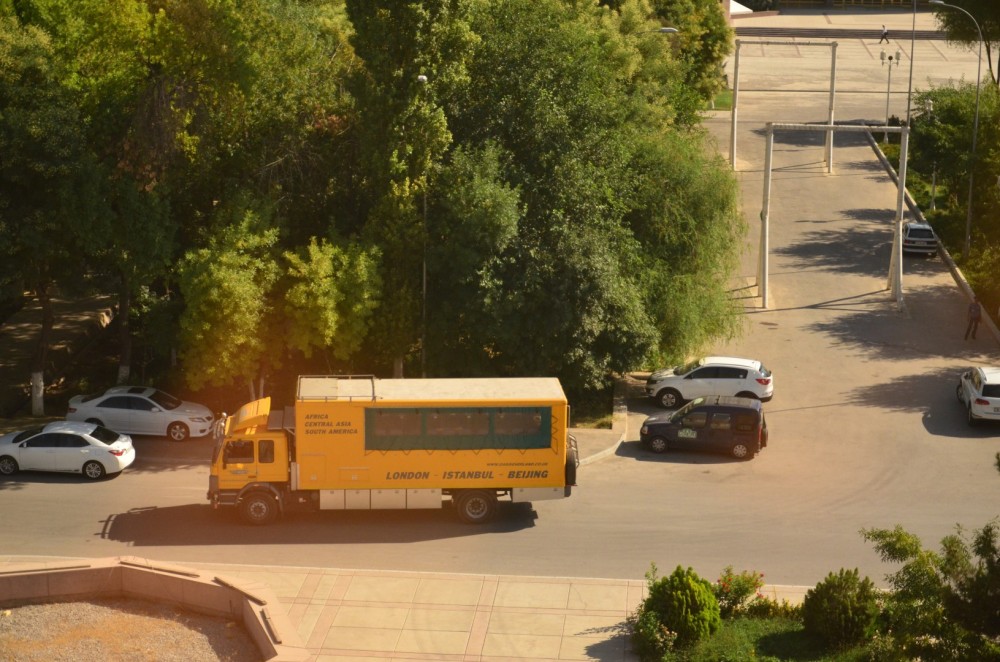 We caught up with the Oasis Tour folks and the Team Yeyo148 (driving a firetruck to Mongolia) at the hotel’s outdoor bar/restaurant. The hotel itself had multiple bars/restaurants and seemed to be a popular upscale place for drinks and to go dancing. Loud music blared from its numerous discos. After one quick drink at the bar, we headed out to look for food. Sadly, the only restaurant we found was closing soon. Ashgabat has a curfew from 10pm onwards. The waitress told us we could take the food away but under no circumstances could we eat there. So that’s what we did and the food arrived pretty quickly.

We walked back to our hotel with our takeout. By then the curfew had kicked into place. The roads became quieter and fewer cars were seen. The party at the hotel had winded down too. Drunken men and women stumbled out and were on their way home. It felt bizarre to see people so intensely drunk only at 10pm. But due to the curfew, people seemed to go all out leading up to the curfew time.

Ashgabat, as a city, is rolling in oil money and is coated in gold. The city seems to be entirely made of white marble. The streets are clean, wide and decorated with lavish fountains. The government buildings are literally wrapped in gold and would always have ornate, intricate designs carved on the exterior. 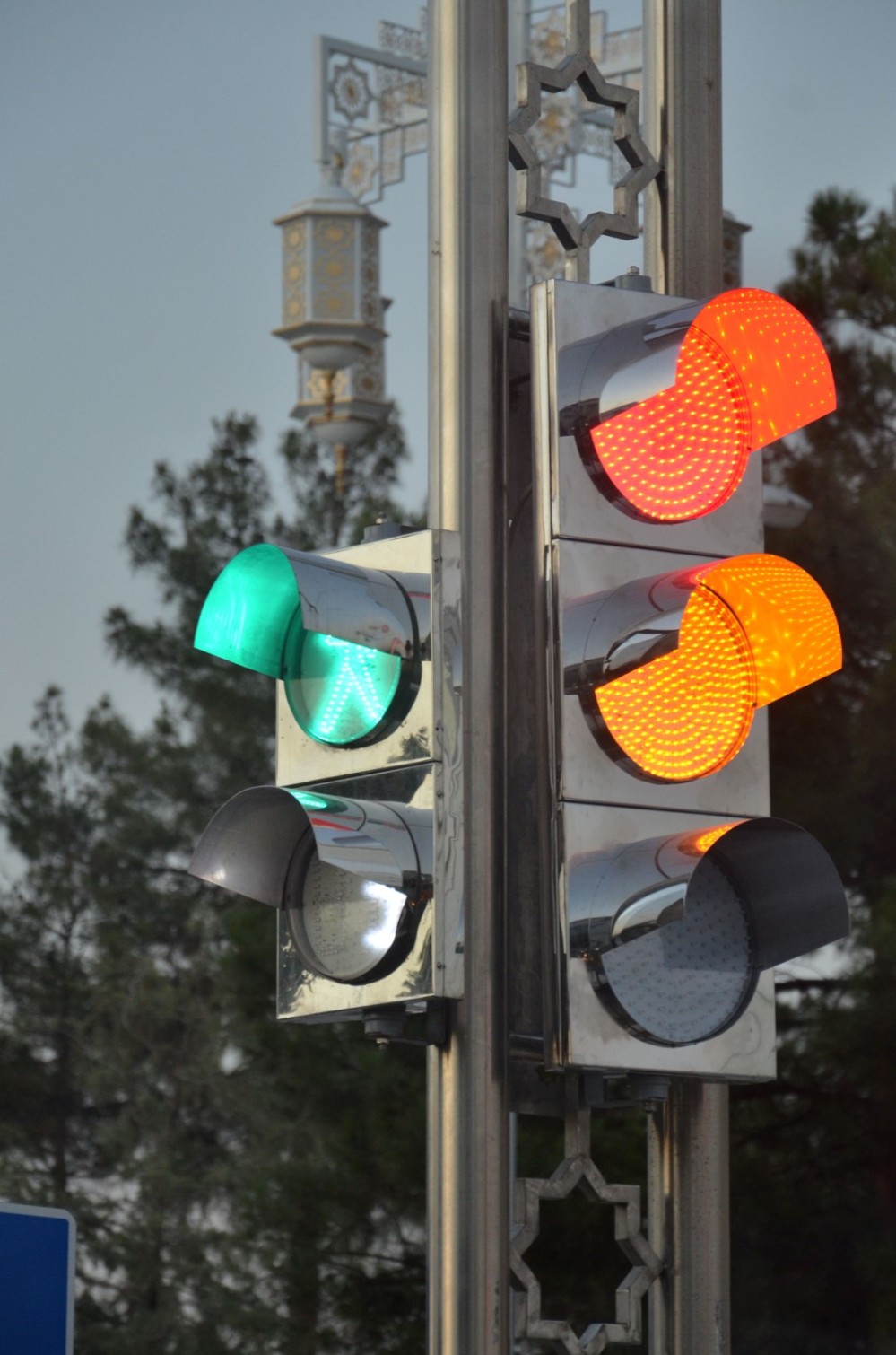 Rumor has it that the lampposts lining the streets cost USD 10k each and the traffic lights are all made of silver. It’s difficult to take too many photos though. Security guards get really agitated if they catch you photographing any official buildings and will most likely result in your camera being confiscated. I tried to be as discreet as possible, but did not want to pass on the opportunity to take back pictorial evidence of this little-known capital city.

The whole city feels surreal and outrageous, given that the rest of the country appears desperately poor. Oil per liter here in less than 1 Manat (~ 30 cents). There are natural resources in abundance but none of them seems to trickle down to the rest of the population and few benefit off the oil riches. In spite of the trying circumstances, the people here are warm and welcoming. 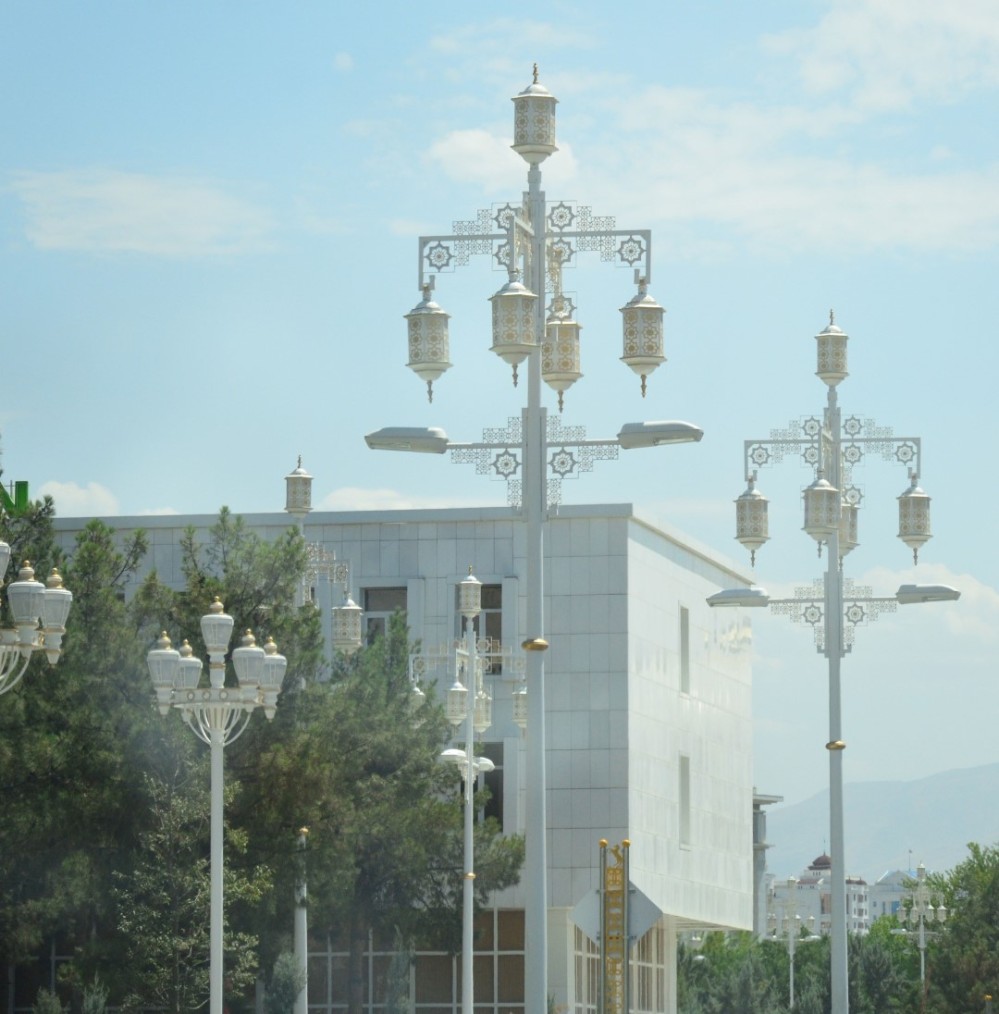 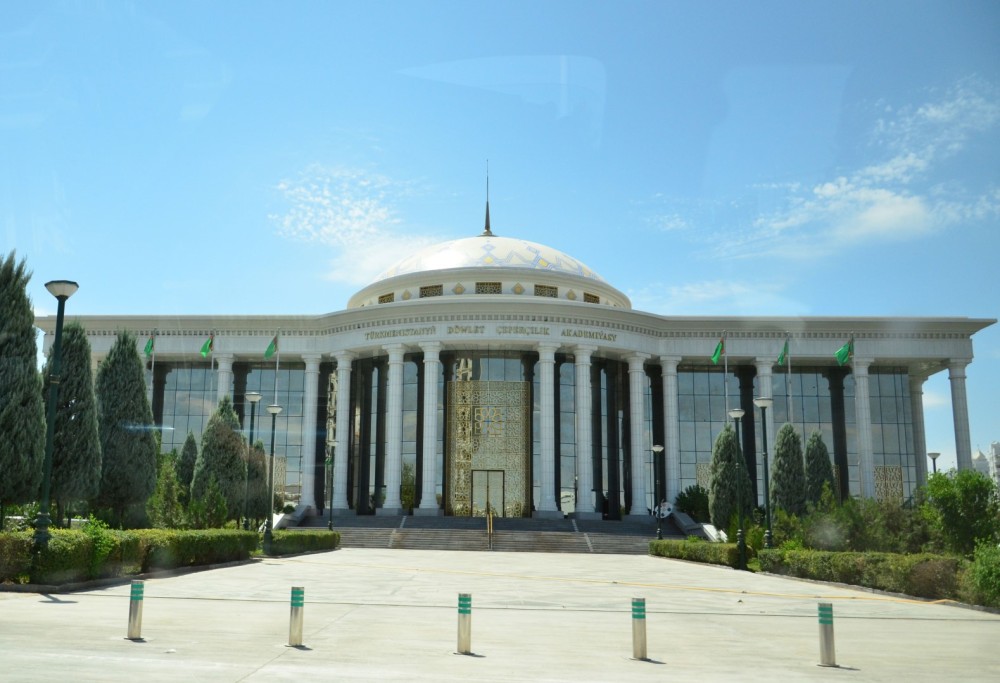 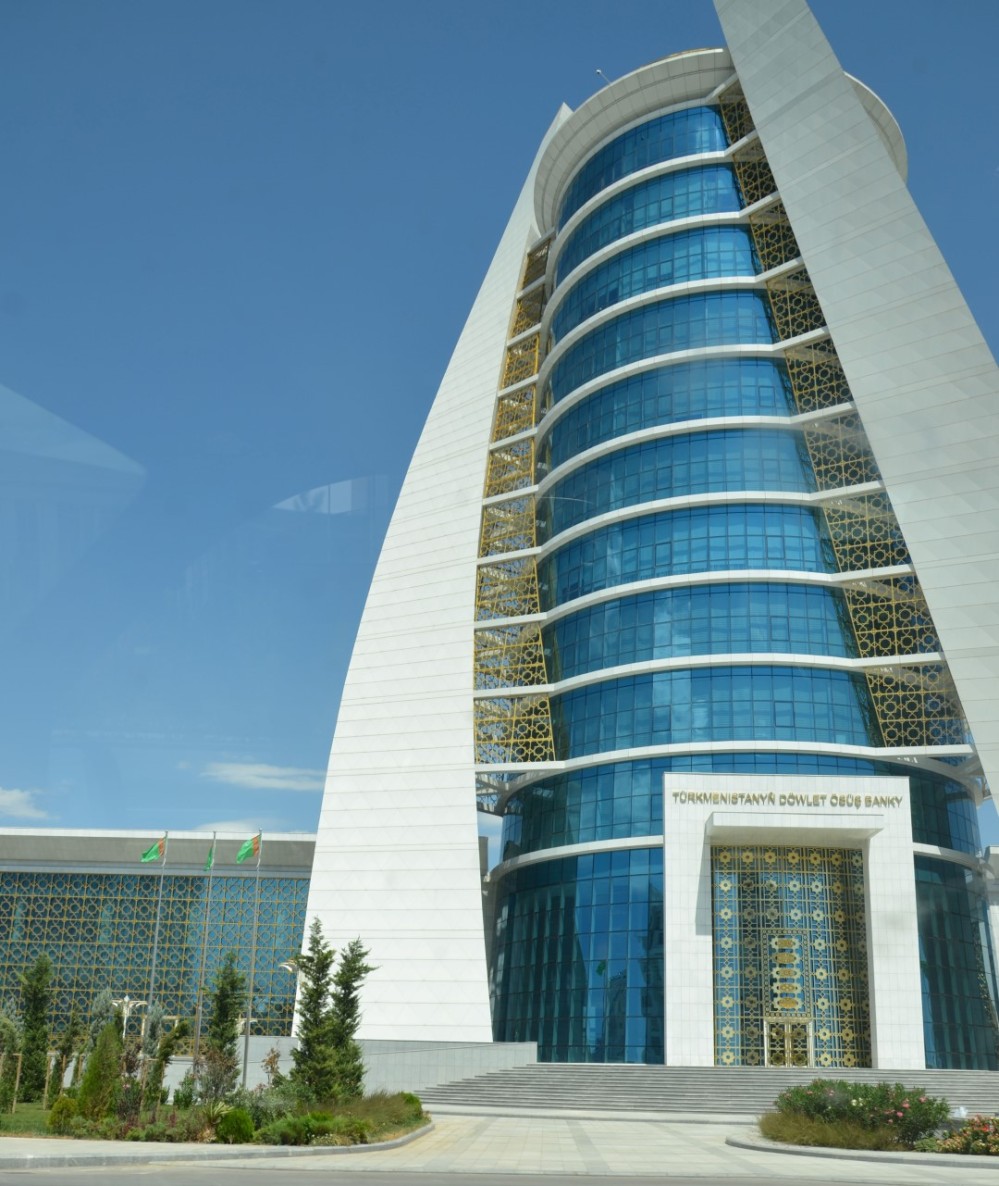 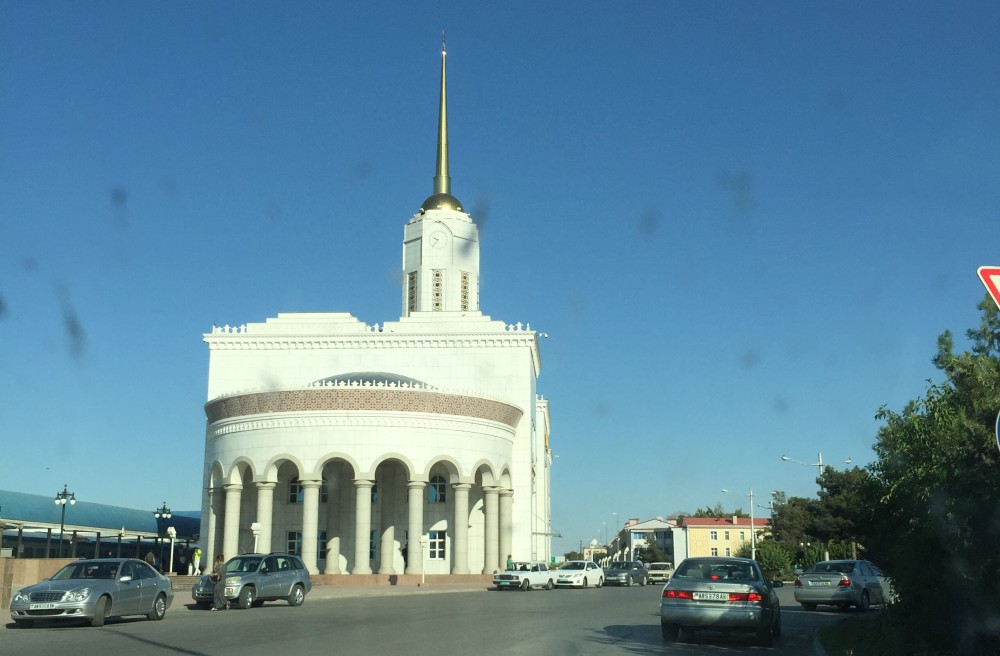 The heat, though, is from hell. Temperatures always hover at the 40 degrees Celsius mark during the day and it is unbearable, to say the least. If there is a hell, this is probably how it feels to be slowly roasted.

It’s only fitting then, that our next stop is the Darvaza gas crater, also known as “Door to Hell”.