If you’ve ever complained about long queues at immigration and border controls, you might as well know that the seaport immigration into Turkmenistan beats them all. If you plan to wash up on the shores of this mysterious country, come prepared with a lot of patience!

We were, surprisingly, two days ahead of schedule thanks to the unexpected ferry. Despite the long wait at the port, we made it to Turkmenbashi relatively quickly. The 18-hour journey across the Caspian Sea actually took 12 hours, thanks to the fancy, new, faster boat.

After a solid 10-hour sleep, which was nearly the best I’ve had until that point on the trip, we got up and headed towards the cafeteria for some breakfast. The choice was still limited, but we were happy to get some fresh omelets, bread and tea to quell our hungry tummies. 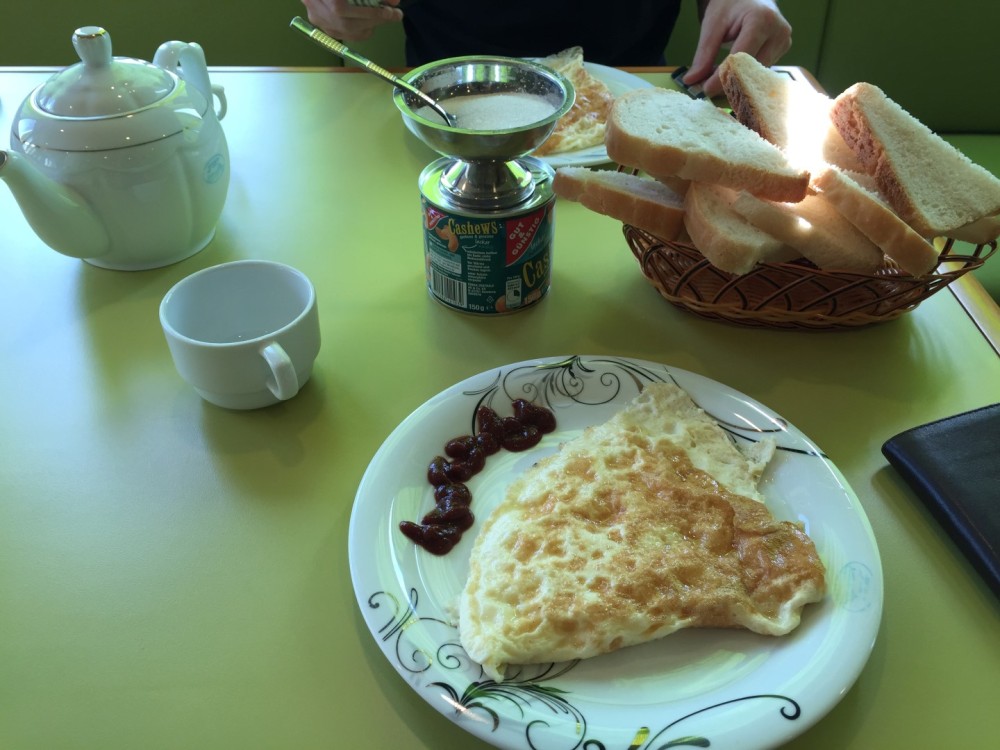 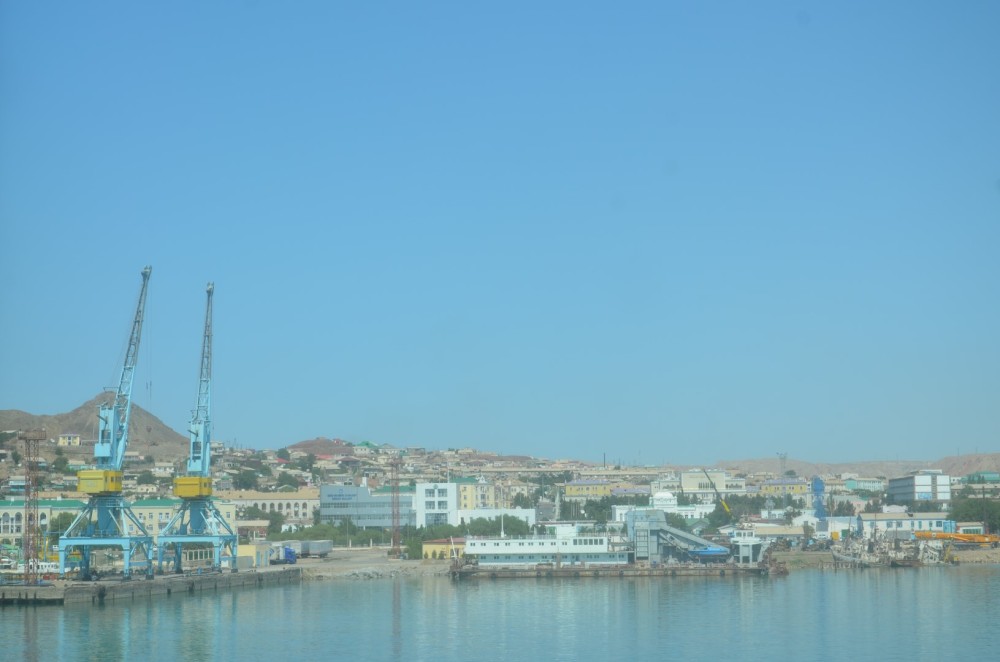 We reached the Turkmenbashi port about 11:45am. For some unknown reason, we stayed docked and did not get off the ferry until 1:45pm. Our passports had been taken away as soon as we boarded the ferry the previous evening. We were handed over our passports one by one when the time came to get off, and we joked that it wouldn’t be impossible to walk off with someone else’s passport. Not much verification was needed to get your documents back!

The primary driver for each car had to stay back. In our case, that was Moritz. The rest of us got off the ferry and waited. It was not very clear what we were waiting for. There were some locals with us. The rally folks just decided to take their cues from them. 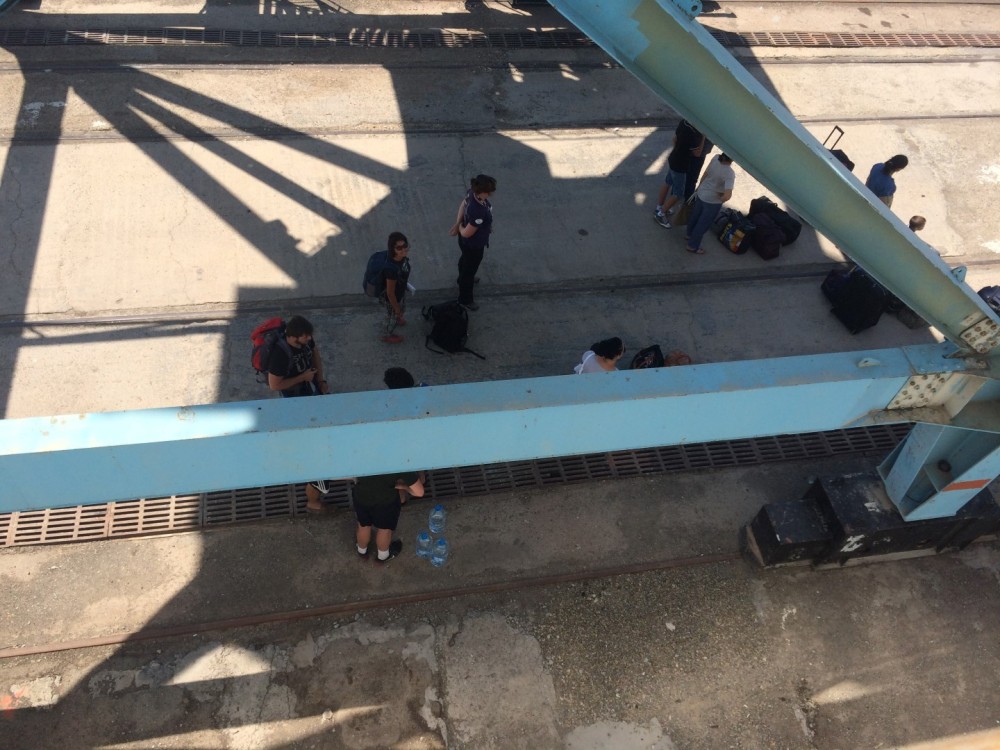 Eventually a bus showed up. We scrambled in. The shuttle ferried us to the port immigration offices, which was about 10 min drive away. When we arrived, there was a mad dash to enter the immigration office. The foreigners hung back, not willing to push and shove. We found a couple of benches and sat down.

It was about 2pm. I expected that within 30-40 mins, we’d be let into the office. I had no idea what was inside. But it sure seemed better than standing in the 44 degrees Celsius heat outside. But a very young yet strict looking guard forbid us to go inside. He looked mean and like he wasn’t messing around. I stayed put. By 4pm, I was still sitting in the same spot, wondering where my teammate was, and how much longer we’d have to wait. 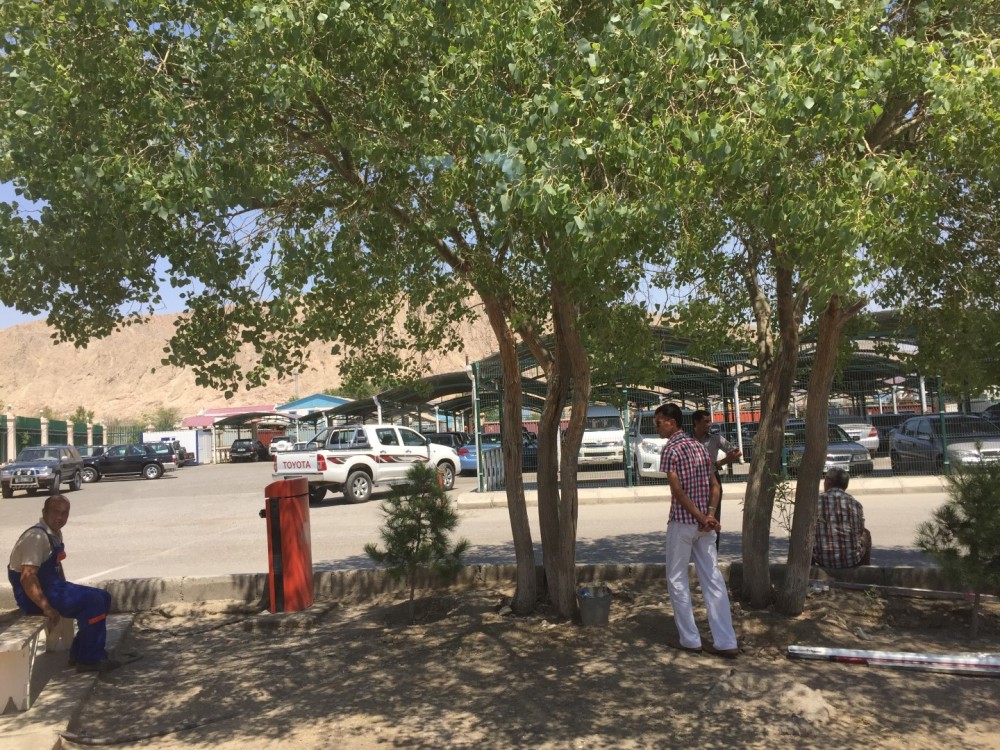 Soon enough, the rest of our convoy showed up. I felt relieved. Apparently one of the other team’s car had some trouble and feared that their car would give way pretty soon. Moritz, being as knowledgeable as he is about cars, quickly realized that they just needed some hydraulic fluid and helped them fix up their clutch. Once everyone had driven out, the cars were inspected for drugs. This mammoth responsibility was undertaken by a tiny, black poodle, accompanied by some border guards. We found it funny, but I guess the border control force assumed that any old dog would do. 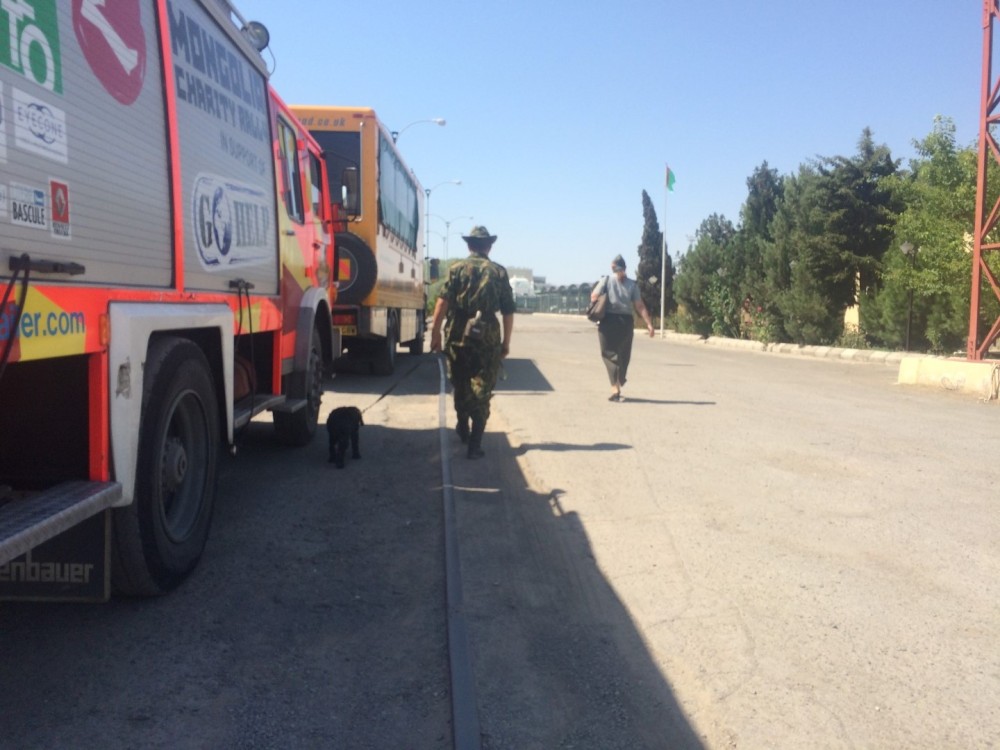 Once the cars arrived at the immigration offices and the teams were reunited, a further round of inspection ensued. They checked for contraband including alcohol, even though we had been checked upon departure at Baku. The border guards seemed pretty used to seeing rally cars. They merrily asked us to see pictures. We were a bit confused. Pictures? We had brought pictures of our family and friends along. We showed them the photos and they seemed pleased. 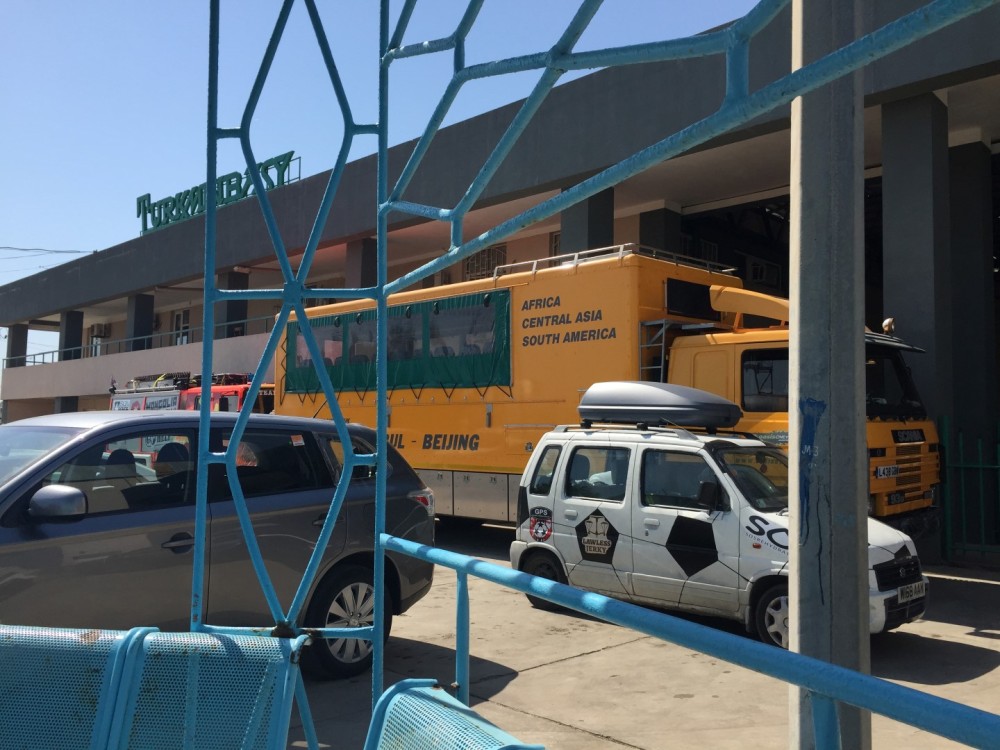 After this, we were finally allowed to enter the immigration offices. Inside was cooler but also incredibly chaotic. Some of the other teams had already been able to enter, and they sat inside looking glum.

We soon realized that the immigration officer issuing the on-arrival visas was just sitting in his counter. The system had crashed once again, and it was being rebooted. Someone said that the officers go home for the day at 6pm. This meant we had two hours to process our visas, pay for the car and get out of the port.

We kept waiting. I still wasn’t sure why and for whom. Eventually at 6pm, we all queued up to get our visas. It took about 10 minutes per person. The immigration officer barely looks at you while processing your visa v-e-r-y–s-l-o-w-l-y. He then pasted a sticker into our passports and then gave us some papers to take to the counter next door. There, we were to pay for our visas (in exact change in dollars, no dirty notes please) and receive four hand-written slips of paper that have been painstakingly written out by a tiny woman.

We brought these papers back to counter number 1, where the immigration officer stamped it and issued our visas. He also had a list of people that were on the ferry. He handed over the list and asked us to cross our names off it.

What we got was a transit visa, enabling us to cross the entire length of the country in five days. Overstaying can have dire consequences. Getting a tourist visa is extremely complicated, as Turkmenistan doesn’t need your tourist dollars and wants to ensure a tight control over its population. Turkmenistan ranks above Afghanistan and Libya in the world’s least visited countries, with an average of just 7,000 tourists per year. That’s pretty much why we’ve come knocking!

Due to the tight controls, you need to tell the Turkmen embassy when you ask for your letter of invitation where you intend to exit the country. Thanks to the screw-ups by The Visa Machine, our invitation letter said that we’d be exiting the country at Farap. This was not the plan. We planned to leave the country in Daşoguz up north. Because of this error, our visas also had Farap printed on them. Other teams also had the same issue. We asked the immigration officer if this would be a problematic, since we’d heard that we could end up paying a hefty fine if we attempt to cross through the wrong border. He assured us through non-verbal communication that this would be no problem. But you never know. This was Turkmenistan after all!

With the visas out of the way, the designated primary driver of each car needed to fill out multiple forms. This included health inspection, calculation of road & gas tax based on the distance we planned to cover, customs clearance, insurance, further physical inspection of the car and then some more papers. When all the papers had been signed and every item paid for, we were done, or so we thought.

In total we paid:

This is in addition to the USD 550 we paid at Baku port, the USD 100 we paid to Ishmael the fixer and a USD 13 ‘arrival tax’ Moritz had to pay before driving off the ferry.

After all of the above was completed, we were forced to pay an additional 4 Turkmen Manat (a little over 1 USD) as parking fee for leaving our car in front of the immigration office! Some teams didn’t have even that after coughing up all their cash to pay for visas and insurance, so they managed a way to barter for cigarettes.

All I can say is carry plenty of cash if you’re planning to arrive by ferry. Some of the teams ran out of money and had to borrow from others. The amount of cash you’ll need upon leaving Baku and arriving in Turkmenbashi can be incredibly unpredictable. We had done plenty of research but hardly found anything online about the specifics. Just to be sure, carry at least USD 1000.

After paying for parking, a final security guard looked over our papers. He made a great deal of small talk, expressing his delight in meeting a Bangladeshi, questioning if we were married, if I was Muslim, if we had kids, etc. His enthusiasm was endearing, but we were exhausted. We were ready to leave the port.

At about 8:15pm, we all reconvened outside the port offices. We had six teams when we boarded the ferry in Baku, but the Spanish team had a tour guide because they had a tourist visa and were able to process their papers faster and therefore, had left earlier. The rest of the five teams were left behind. We regrouped, and decided to drive as far as we could while there was still light out. 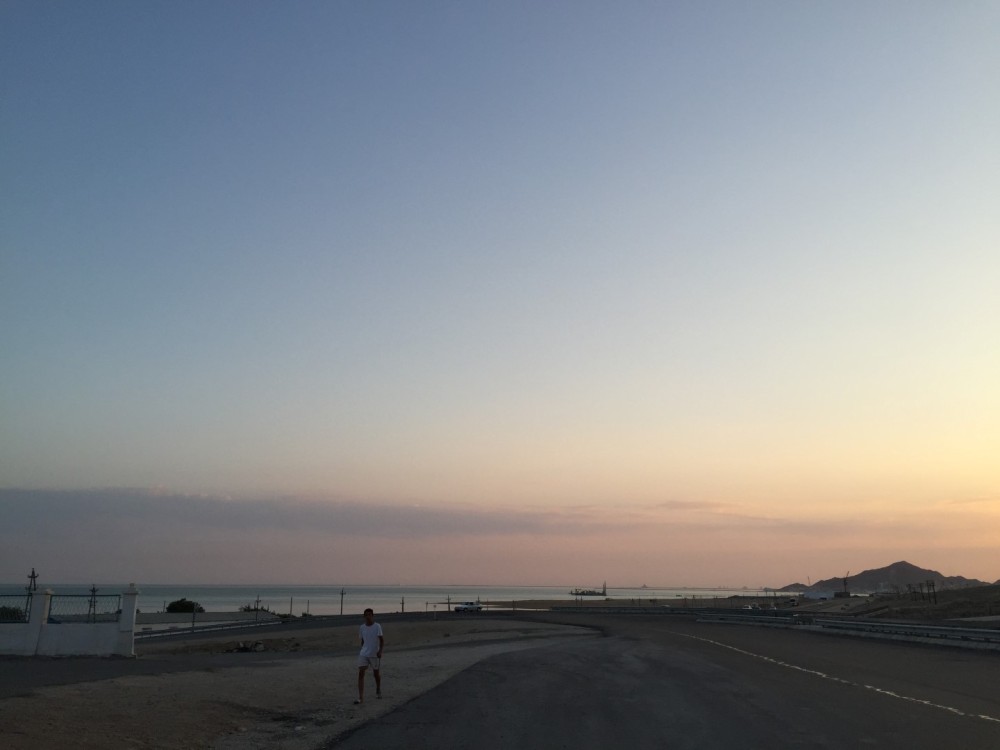 On our way out of the area, we were stopped at a checkpoint. Not having any common language between us, we struggled to understand what they wanted. The border guards grew frustrated and aggressive because we wanted to leave and they wanted something from us. We were weary and thought they wanted more money. David, from the team FC Mongoal, proved to be the smartest one of us all. He produced all the papers we had received at immigration and asked, “Which one do you want?” They picked out the little blue slip we had received upon paying 4 Manats for parking. Once we figured out what they wanted, they let all of us go.

We stopped for gas and took a few photos of the sun setting on the Caspian Sea. We were depleted of energy but elated at having made it to Turkmenistan! We couldn’t drive much further than another 30 minutes, and found a small clearing by the side of the highway to camp. It was hot, dusty and extremely windy. We made some noodles, sat with the other teams for a bit and went to bed by 10pm. I could hear trucks driving past on the highway. If it wasn’t for the trucks, it could’ve very well been on a different plant. The rocky terrain, coupled with the heavy darkness, felt surreal. But we had arrived. This is where it all begins.