Plitvice National Park is one of the earliest natural sites included in the UNESCO World Heritage register. This was to be our next stop after Dubrovnik.

We started early in the morning to cover around 500 km of driving, and made it in 6 hours with a few coffee stops in between. The fun thing was that to get from Dubrovnik to Split, Plitvice or Zagreb, one has to cross the border twice. There’s a stretch of 50 km in between that belongs to Bosnia & Herzegovina, where we stopped for coffee and then continued our journey to Plitvice. The goal was to get there by 1pm, so that we could at least spend 6 hours in the park. We spent more than 7 hours, and probably would’ve spent longer had we not been so tired from the early drive.

The Plitvice National Park is made up of 16 interconnected lakes arranged in cascades. The lakes are separated by natural dams of travertine, all of which display brilliant shades of green. Words cannot do this place justice. 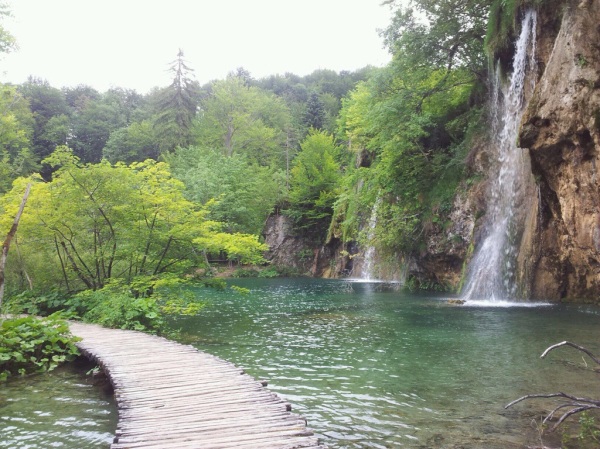 After drinking in all the greenness the park had to offer, we headed to our accommodation for the night. We were greeted by our smiling Croatian host, who managed to whip up a gourmet dinner to feed his hungry guests. We were staying at a farmhouse on the countryside that, among other things, had a wine cellar, an outdoor clay oven to grill and a chicken coop. The next morning, we had yet another delicious homemade meal consisting of fresh eggs that had been scrambled, cheese, homemade bread and coffee. Somehow, those two meals have been the best meals we’ve had so far in the trip. Our host was attentive and generous and I felt like I could spend a whole week there, eating good homemade meals made of fresh vegetables harvested in the garden and staring out the terrace to the distant mountains.

Alas. Next stop is Zagreb, where we’ll spend a day a before heading to Slovenia.