Dubrovnik, in my head, has always been this magical place. When we got there finally, it did not fail to impress. The late afternoon drive from Kotor was rather pleasant, with the top down and the cool breeze providing a much needed respite after a scorchingly hot day of climbing the city walls of Kotor. The drive even included a short 10 minute ferry ride, which I haven’t done in a long while. It brought back memories of heading to my grandparents place is Jessore, which back in the day, required a ferry transfer.

We arrived in Dubrovnik rather late into the evening but managed to find our villa quickly enough. The villa, which sat atop a hill overlooking the water, seemed to have been split in two using a fence right down the middle of the staircase leading up to the main building. The two divided properties were labelled for an S. Benic and for an M. Benic. We deduced that the original property had probably been handed down to two siblings and hence the equal split. Our host was a smiling Croatian lady who still lives in her part of the villa with her husband and rents out two rooms upstairs.

First impressions of Dubrovnik is that it is beautiful, very touristy and rather expensive. We scrounged up some late night dinner and strolled through the beautifully lit-up white-stoned old city.

The next morning was a surprise. It was raining cats and dogs. After the rain let up, we headed to do the one must-do thing in Dubrovnik: climb the city walls that surround the old city in its entirety. Needless to say, the views from the wall are spectacular, but doing the whole walk offer glimpses of this city from different angles. The weather seemed rather fickle: it would drizzle sporadically but the sun would shine through every now and then. 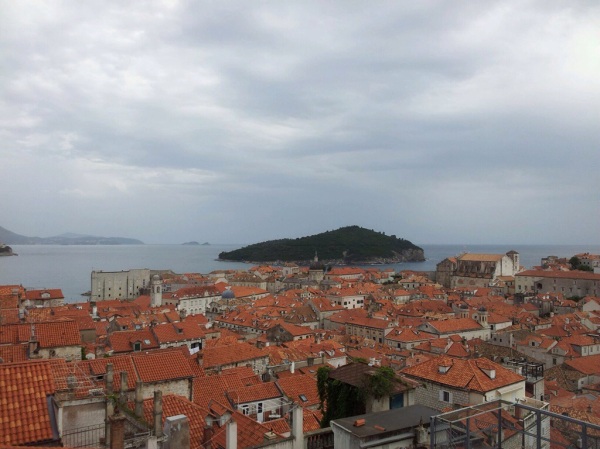 After a 2 hour walk, we headed to the War Photo Limited gallery.

One of the intentions of doing this trip included trying to understand the history and the culture of the region a bit better, and after getting here, I feel like I know close to nothing. So we took the opportunity to visit this photo gallery that includes some rare war photos of the breakup of Yugoslavia. What we did not expect was a temporary exhibition by Narcisco Contreras, a well known war photo journalist, called “Syria: a journal of pain”. The exhibition depicted heart-wrenching photos of the war in Syria. It’s easy to look at photos of wars from the past and feel relieved that it’s over. It’s much harder to look at evidence of events that are happening as we speak, and wonder why or how the whole world looks the other way while the atrocities continue. It makes it even harder to believe in a God, whatever name each of choose to call Him, that allows such pain and suffering.

The exhibition and the gallery was incredibly powerful and I’d encourage you to check out the courageous works of Contreras and other war photo journalists that brave the danger to bring forward the human stories of real people experiencing such atrocities.

The mood was a bit subdued after visiting the gallery, as we mulled over what we had seen. Nevertheless, we wanted to go up to Mount Srd which overlooks the city of Dubrovnik. The cable car that takes one up the mountain was down due to bad weather, but we decided to head there anyway by car to catch a glimpse of Dubrovnik as the sun set. We were not disappointed. We could see a stretch of the Adriatic coast beyond Dubrovnik from Mount Srd, and the view was spectacular.

While Dubrovnik was a bit too touristy, the old city and the beautiful coast was worth wading through hordes of people. Next stop is Plitvice National Park, a 6 hour drive from Dubrovnik, a nature sanctuary consisting of large emerald green lakes and waterfalls.