The first order of business this morning was to go in search of a mechanic, after spending the night in a home stay sharing a large room with a Dutch couple. We had a simple breakfast of milk rice, even though delicious smelling fried fish was on the menu too. I wasn’t sure how my stomach would cope, so I stuck with the milk rice and tea.

Our host at the home stay escorted us to Alichur’s only mechanic, who at first couldn’t be found.

Our elderly host spoke pretty good English and we conversed with him while waiting for the mechanic. He asked me if Moritz was my husband, almost as if to verify what he had been told by Moritz the previous night was true. He also asked if Moritz was a good husband, and I confirmed, yes, he was a kind, caring husband. We had made up our minds earlier to say that we were married to make answering questions less complicated, but to be quizzed about our relationship was becoming the norm in Tajikistan!

The mechanic was eventually tracked down and consulted. He understood our problem and also seemed to understand what we wanted to have done. He agreed to help.

So began our attempts at fixing the car once again. The mechanic procured the right type of springs and got to work. He first had to take out the pipes the earlier mechanics from Langar had put in. Then he welded a plate to the bottom of the spring and further welded the plate to the car.

The temperature in the meantime had dropped. I wanted to change into my jeans. The mechanic showed me to his house where his teenage daughter received me with a smile. She and I spoke not a single word in a common language, but I asked her where I should change. She smiled shyly and said, “Here!” and disappeared into another room. I changed and came back out to see how we were doing with the car.

At one point, while waiting for the repairs to be completed, I noticed the family toilet. It was located just behind the house. Toilets are usually simple outback facilities with a hole in the ground. Nevertheless, it normally offers some modicum of privacy. This particular toilet had no doors or curtains and faced the open road through the sparse group of houses. It seemed unusable unless you wanted people passing by to figure out what exactly you were up to. But I soon realized how the local female population made use of this toilet.

I saw two teenage girls head towards the loo together. One stood inside the door frame and held her skirt fanned to the sides so the other girl could squat and use the facilities.

There are so many things we take for granted. Being able to take care of your bodily functions in private without having someone stand guard is one of them.

Not having access to adequate sanitation, especially for women, is not uncommon. I recalled a news story I had read, about a young woman in India who killed herself, humiliated from having to go out in the fields to relieve herself. She had asked her parents to build an indoor toilet but they refused, in order to save money for her wedding. It is also not uncommon to be assaulted while a woman in a rural area goes out in the middle of the night to urinate. In many part of the world, such needs for privacy are deemed fanciful. Dignity is considered a luxury. Watching the two girls use this Tajik toilet left me pondering.

After working on the car for a couple of hours, the repairs were done. It was exactly what Moritz had envisioned and, after a test drive with the mechanic, declared it fit for purpose. There were smiles all around and a sense of accomplishment! 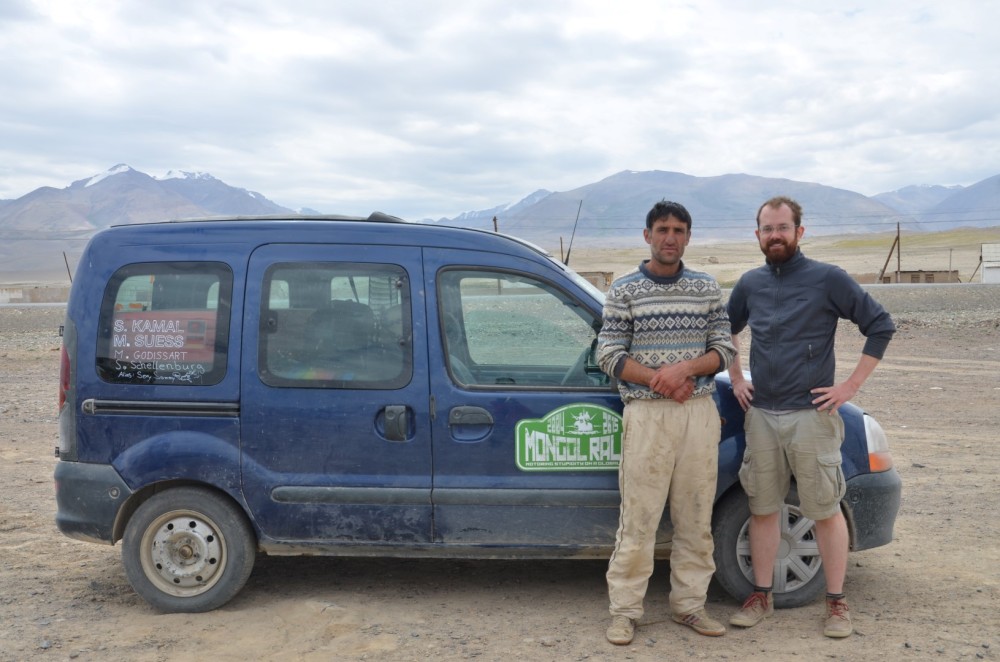 We took a couple of photos with the mechanic and his family, and gave them a printed copy of the photos to keep as mementos. We were truly grateful. There were lots of children around, so we handed out some sweets. We paid the mechanic USD 150 for all his hard work. He was overwhelmed – it was more than he had expected. We were offered tea by his wife, as a sign of Tajik hospitality. We left saying happy goodbyes, full of gratitude that our car was running at least at 50% capacity.

After the repair, we drove 100km to Murghab, the town we had been trying to reach for the past 3 days. We had a delicious meal of yak dumplings and rice soup at a hotel. We filled up our tank on gas, changed some money at the hotel we ate at and headed off for Sary Tash, just across the border on the Kyrgyz side.

We knew we wouldn’t be able to drive another 230km that afternoon, given that we only started driving at noon. So we decided to camp at Lake Kurakol, 100km from the Kyrgyz border.

Along the way, we spotted numerous chubby marmots, poking their heads out of the ground and scurrying across the rocky landscape. They were extremely cute and would often go back underground when they spotted us.

We also came across a number of washed out bridges. Luckily, the water levels were low and we could easily cross without getting stuck.

There was a town near Lake Kurakol. Every house appeared boarded up and the town deserted. We parked at a beautiful spot by the water, but there wasn’t a soul in sight. 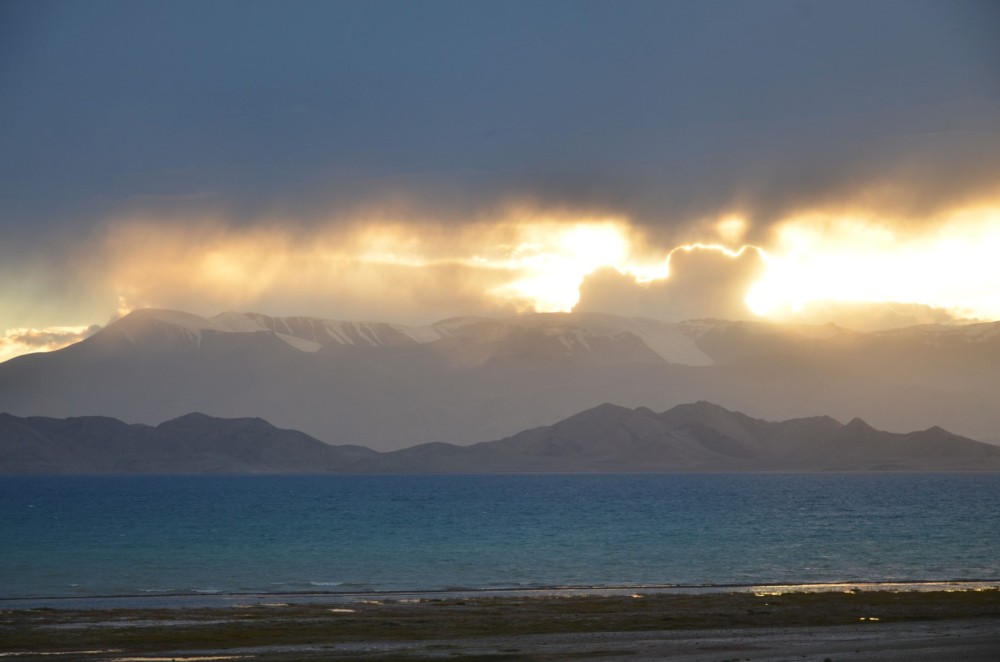 It was too windy to set up camp outside. So we put up our wooden platform inside the car (where we usually sleep on a futon), opened the sunroof and made a pasta dinner. It was cramped but we managed to eat dinner, roll out our futon, and go to bed.

It was freezing cold but the lake was breathtakingly beautiful. I fell asleep while watching the stars, though feeling mighty itchy and restless. 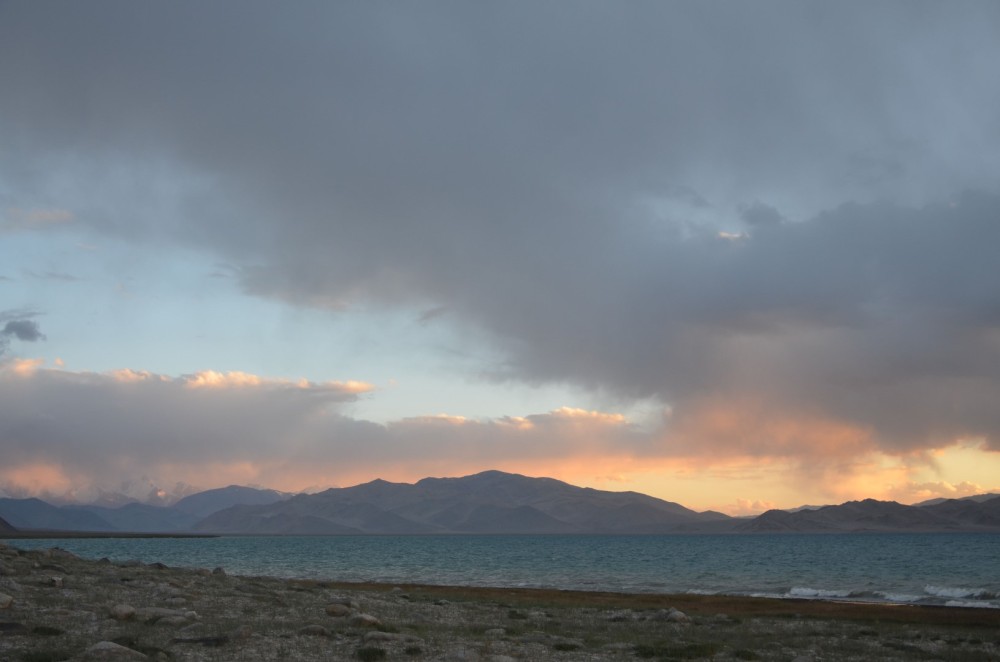